[note: the following article, originally available online at Hubpages since April 2012, was recently blocked/unpublished "because it did not receive high enough ratings".]

As a background resource (article and comments on this Hubpage site), please see this post before reading further. 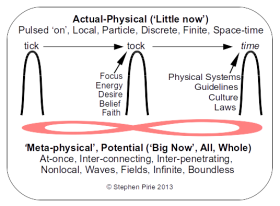 As is common in the above article, on many websites, and in many textbooks on the subject of Zeno's Paradoxes, many incorrect and unsupportable assumptions are made concerning the solutions.

All those that propose 'infinite-series' can be used to solve the paradoxes ignore a simple, elegant fact -- if physical movement involves an infinite-series of 'infinitesimal' little steps, there can be no physiological (electrical, chemical, neurological) processes in the body that can account (cause) that movement.

It is clearly impossible for any physiological processes to start, continue (ad infinitum) and then stop such an infinite-step movement. The brain certainly cannot 'fire infinitely' nor can the electrical signalling in the body move one's muscles to such a fine degree.

The mathematics of infinite-series, and thus the solutions based on them are NOT congruent with our everyday, physical experiences.

So what is really going on?

This is where the science of quantum physics enters the picture. We now know that physical movement is not fundamentally continuous. Movement involves jumps, and the 'space' in between is not traversed.

Proposing a finite-step process can then be correlated with finite processes in the body, providing some understanding of what is actually happening.

As was explained on the above Hubpage, calculus 'maps' the superposition states of movement. In that sense it maps 100% the movement of things through meta-physical spaces. But for physical movement, only? No, it is quite simply wrong to say that calculus (infinite-series) solves Zeno's Paradoxes (in the context of moving through infinite PHYSICAL steps).

So there we have it: congruent solutions (congruent with our everyday experiences) to Zeno's Paradoxes.

More detail and explanation is provided in the article "Congruent solutions to Zeno's Paradoxes" on the Belief institute website.

You're beating a dead horse here. Zeno's paradoxes were an attempt to disprove a new branch of math, the study of infinitesimals. He attempted to do that by using the physical world as proof, while still believing that the world (and movement) was a continuous process.

We now know the world is not continuous, but composed of discrete steps and thus Zeno was wrong. He was also wrong in the purely mathematical sense; if the world was continuous as he believed the eventual development of calculus (out of the study of infinitesimals) shows that.

Mathematics does not always describe the world as well as we would believe. Newtonian physics and its calculations and mathwas absolutely correct. Until Einstein came along and upset the apple cart. New conditions required different math and different measurements. So it is with quantum mechanics; calculus works perfectly far beyond the point our limited methods of measurement can take us, but we now know that there ARE limits beyond which calculus becomes false. It is still perfectly true mathematically but no longer describes the physical world around us.

The mathematics behind Zeno's Paradoxes were incorrect both mathematically and physically. Calculus shows the first and quantum mechanics gives a lie to the second.

I think there would be competent scientists who would take issue with your assertion that "Newtonian physics and its calculations and math(s) was absolutely correct."

Not forgetting that they would also draw your attention to your failure to fit theory with fact.

To suggest that the mathematics of infinite-series describes physical movement is bizarre, to say the least. Again, what physical processes enable a person to move a body part through infinite (that is "never-ending") series of physical increments in movement?

Answer: there are none.

Now, as was mentioned in a reply that you deleted on your hub, the pertinent question to ask is "why do reasonably intelligent people deny or avoid applying the scientific method of fitting theory to fact?"

The answer, as I've explained elsewhere ( The Modern Superstitions of Science and Religion ) lies in our seeking to deny responsibility for the world we experience. When we believe in a mechanical universe model, we can "stand apart" from the "great machine" and abuse the animals and ecosystem at will, because, hey, it's just a machine, albeit an incredibly complex one. So goes the theory.

When we accept an observer-created reality model (or holodynamic systems model) we can't deflect responsibility, or blame chance or God for what happens. We're plugged in. We're responsible (in part) for the reality we share.

That is the reason people, despite reasonable intelligence, pointedly denying or avoiding the simple, elegant fact that infinite-series do not solve Zeno's Paradoxes.

Reminds me of an old story from my college days: Picture a 10 foot long couch, on one end sits the most beautiful woman in the world and she is ready for action. At the other end, place a man and allow him to move one half the distance to the woman every minute. A physicist placed into that situation will proceed as ordered for a few minutes and then say, "close enough." A mathematician, on the other hand, will never start because he *knows* he will never get there.

I had not heard that story before, but it speaks a truth -- the physicist will make a leap of faith, ignoring theory (what's in his head), and thereby get results.

Physicists (if they're worth their salt) will be pragmatic and "empirically alert" (and not deny reality).

Any good physicist will, accordingly, live on Planet Earth. Not sure what planet the mathematicians are on, though.

I should add that any decent physicist will be artistic in approach as well:

"Einstein himself was always ready to agree that inventiveness, imagination, the intuitive approach?the very stuff of which artists rather than scientists are usually thought to be made?played a serious part in his work."(1)

Hence my earlier reference to "leap of faith" (an artistic, intuitive process).