Men are particles, women are waves

Update (August, 2016) - see latest regarding the dynamics of gender

When writing Be and Become during the latter half of the 90's, the various revisions of the manuscript1 included chapter (Nine) titled as "Men are particles, women are waves".

However, prior to publication I had the thought (contrary to my better instincts) that the chapter would best be titled differently, to what is now "Material men, wonderful women". It was, I thought, less likely to be dismissed as 'stereotyping' people, even though I felt at ease with the "Men are particles ..." title.  "Men are particles, women are waves" quite adroitly and succinctly expresses the inherent dynamics of life towards individualism, and collectivism -- men and male animals do (as a general rule!) bias themselves towards the hard, physical, individualistic side to life (characteristic of particles). Women do bias themselves towards the soft, interconnective, cooperative, relationship side to life (characteristic of waves and fields).

Hardly -- walk down any street asking everyone encountered their occupation.  Then note the gender percentages of those in the 'hard-sciences', engineering and Information Technologies, compared with those in care services, humanities and communications.

The bias is not because men or women are 'pushed' into the various professions, or due to restrictions such as 'glass ceilings'. There's been plenty of attempts to get more women into IT, but they simply just aren't as interested ... as a GENERAL rule!. Yes, there's always exceptions, but we're talking 'bias' in numbers, of percentages, not of exceptions.

It doesn't pay to second-guess that which is beyond modeling or explanation -- the intuitive.

The "Men are particles, women are waves" description works well to explain the behaviour of the sexes, and not just for people, but also for animals, plants and ... wait for it ... quanta as well.

As explained previously, very small bits of physical stuff comes in the form of either masculine 'fermions' or feminine 'bosons'.

The particle nature is a short-pulsed actuality, coming in jumps and lumps. The nonlocal ground from which it arises, is interconnecting, fluid, potential, creative source -- see Fig. 4 (right). 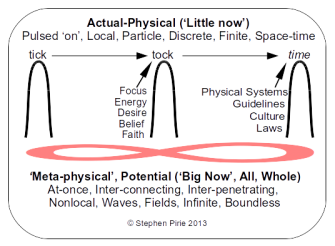 Additional masculine-feminine characteristics are provided in The Table of One and All.

Chapter Six of the book features the Table of One and All, with excerpts as follows:

The Table of One and All encompasses and includes all aspects of life into one framework of understanding. In view of its 'infinitely-inclusive' framework, it is able to be used in all areas of experience to reveal deeper insights into life. 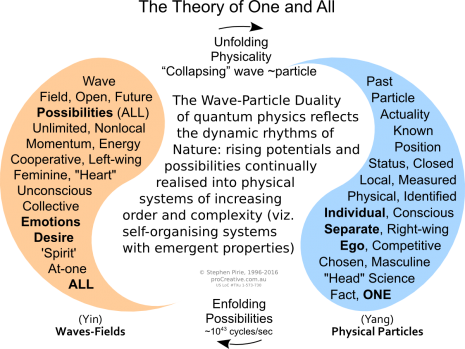