The feminine urge to tribalise

A while back I posted some ideas concerning the habit of categorising people into various groups — tribes, astrological signs, enneagram and other groupings.

Men are particles, women are waves

Update (August, 2016) - see latest regarding the dynamics of gender

When writing Be and Become during the latter half of the 90's, the various revisions of the manuscript1 included chapter (Nine) titled as "Men are particles, women are waves".

However, prior to publication I had the thought (contrary to my better instincts) that the chapter would best be titled differently, to what is now "Material men, wonderful women". It was, I thought, less likely to be dismissed as 'stereotyping' people, even though I felt at ease with the "Men are particles ..." title.  "Men are particles, women are waves" quite adroitly and succinctly expresses the inherent dynamics of life towards individualism, and collectivism -- men and male animals do (as a general rule!) bias themselves towards the hard, physical, individualistic side to life (characteristic of particles). Women do bias themselves towards the soft, interconnective, cooperative, relationship side to life (characteristic of waves and fields).

Hardly -- walk down any street asking everyone encountered their occupation.  Then note the gender percentages of those in the 'hard-sciences', engineering and Information Technologies, compared with those in care services, humanities and communications.

The bias is not because men or women are 'pushed' into the various professions, or due to restrictions such as 'glass ceilings'. There's been plenty of attempts to get more women into IT, but they simply just aren't as interested ... as a GENERAL rule!. Yes, there's always exceptions, but we're talking 'bias' in numbers, of percentages, not of exceptions.

Astrology, the Enneagram and Seth

The Table of comparisons highlights a noticeable difference between the 3 methods of classifications. Column 1 (Seth) responds well to the question: "Where do those who belong to a particular category focus their energy, time and commitment for best effect and fulfillment?"

The Enneagram responds "less directly" to this question (in that the Enneagram may offer insight that one is a 'leader' but not where to apply leadership for best effect or fulfillment).

Astrological categories provide little if any meaningful answers to this question.

Astrology and the Enneagram are not in the least "systems-orientated". They do not take account of the interactive dynamics of biological, ecological or social systems, such as that of one's local community, or how the global economy impacts and influences behaviours and attitudes. They do not therefore provide substantial insights into how we ought best interact with the world around us. They, in effect, offer little guidance as to where we might apply our energy and focus for best results and fulfillment. 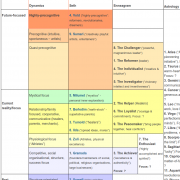 The fields and disciplines of psychological testing, astrology, numerology and the Enneagram, are, like all fields of human understanding, based on certain beliefs about the nature of reality.

So when we seek to group people into meaningful categories it's prudent to first establish the belief-system by which those categorisations are made. If the belief-system is unduly limited, individuals and groups will necessarily be categorised or 'squeezed' into various psychological or astrological 'boxes' to fit the observed behaviours. In the process those capabilities and potentials that lay beyond the accepted framework of belief — which could otherwise be recognised and developed for personal and social benefit — will be ignored or denied.

As explained on the About page, my focus as The Belief Doctor®1 is to work with people and provide examples and information that reveals the power and productive benefits gained from combining "masculine" and "feminine" energies in one coherent approach to life, in all areas of life. This combination — of effectively combining both 'head' with 'heart' to enable intimate, powerful and rewarding personal, business and social relationships — is recognised by leading thinkers as being crucial to ease, wellbeing, intimacy, creativity, productivity, innovation, health, wealth, fulfillment and happiness.

Do you genuinely seek answers to the deeper questions and problems of life?

Then you'll find some different and arguably deeper, and more congruent perspectives at this site. Hopefully they'll be of value to you. The ideas provided are based on timeless truths, and are (at least in my experience) able to be applied in all areas of life. Enjoy. Stephen Pirie The Belief Doctor

One of the central points of Jahn's paper is that not understanding the complementarity of 'masculine' and 'feminine' fuels "immensely destructive" behaviours and results, both personally and socially. From Jahn's paper: