The Cruelty of Astrology

Imagine you're at a really nice restaurant with an amazing menu. So many choices, so much yummy food available. You're out celebrating your birthday, so you decide to order entrees, main meal and dessert. After all, it's the one day of the year when it's about you, not the kids, or spouse, or friends, just you. The waiter arrives and asks for your order. So you give your order, eagerly expecting the yummy food in due course.

Except that ... the waiter inquires as to your birthday. You tell him, then he informs you, "sorry, but you can only order from (pointing) that section, which is 1/12 of the available menu." Whaaat, no way", you say, "but I don't like the food in (pointing) that section".... well that's astrology for you. You can only have 1/12 of the available menu of abilities, characteristics and strengths available to all.

Why limit yourself, to one section of the menu, or one box of qualities? Why not simply engage those qualities and characteristics that you need to achieve your goals, or those necessary to enjoy the quality of relationships you want?"1.

Consider the negative effect of being constrained, or stuck in one box (of characteristics and abilities). Let's say you're unwell. And continue to remain unwell -- because the abilities to self-heal (naturally) are characteristic of those qualities within another box, to which you do not belong.

The general belief I hear repeated is that we're influenced by (subtext: we're victims to) the motion of the planets. In reply I ask, can we not choose to go our own way, make our own choices, enjoy our energy independent of those "influences". To which I generally receive, "yes, but they still influence", again inviting me to respond rhetorically with, "and we're free to ignore them, and go our own way."

I mean, being able to choose whatever characteristics or qualities that best serve us, is to me enormously freeing. I can't begin to understand how others must view their world, to be so helpless in the face of some dictatorial edict that says you can't be what, or whoever you want to be, because of some past bit of information about when and where we were born. Hell.

Others tell me how we're subservient to, or under the control of the "elites" who want to reduce the world population to 500 million, or some such. Among such folk I often hear mention of chem-trails, genetic modifications, alien abductions and ...

Now in all these belief-systems, the subtext is the same - we're victims to forces beyond ourselves.

Fortunately, the most successful physical theory in the entire history of the human race (quantum theory) can inject some sense into these sorts of discussions.

First of all, we now know that we're all instantly (nonlocally) interconnected, co-creating the reality we experience. We are not victims, but co-creators. If we are victims to forces beyond us, it is because we acquiesce to them.

My parting words to each of those who espoused such beliefs, was "Power to you!  Not power to the planets, or the elites, gurus or anyone, but you. Take back your power, don't keep giving it away to the planets, elites, gurus - to whomever, or whatever". When we sit at the feet of gurus, what we're really doing is, in effect, saying to ourselves "hey, Mr wise dude, you're way smarter than poor little ol' me, tell me what to think, please." Children can see clearly the machinations of the adult world – we don't need gurus or wise people to tell us what's really going on, out there in the everyday world, or "in here". We can see clearly, we can intuit and know, if we believe and expect that we can.

We are being cruel to ourselves when we limit and narrow our energy and abilities. We are cruel to others when we do similarly, by confining them to one box or another.

It's not like any of this should be a surprise. We've been advised for thousands of years that (paraphrasing2) "if ye have faith as a grain of mustard seed, say unto that yonder mountain, nick off into the sea, it will indeed do just that". As the researchers at Princeton University's PEAR lab concluded after decades of research,

At this stage of our development they're very tiny mountains, but the principle is the same, it's just a matter of scale.

Or, as Henry Ford said, "whether think you can, or can't, you're right."

Or, as Jane Roberts/Seth wrote "You create your reality" (in this and any other reality/dimension -- meaning higher-selves, angels, gods aren't going to save us. We're it. The buck stops with each of us).

And so it goes — power to you, if you wish to claim it.

While reflecting on the above post I remembered stuff I'd forgotten - that there is a very pertinent question to ask of oneself: "who or what owns my life?"

Professor Sir Michael Marmot and researchers found that the number one determinant in a long and healthy life is "control over one's destiny", which is another way of saying, owning your own life, and that it is not owned or controlled by others3,4.

Now, to some extent we are "controlled" by the physical system within which we live, and by the local customs, laws and etiquette. And by our habits, which are beneficial, mostly - insofar as it would be a pain in the proverbial if every morning we had to relearn everything. Habits are highly efficient processes for getting through life. 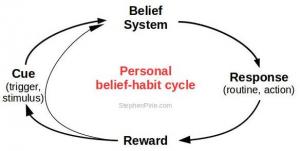 But when we're told how and when to do our jobs without any autonomy, or any ability to creatively find solutions or betterment, that's when our health and wellbeing deteriorates, big-time: when dis-ease becomes disease.

When we blame "others", be it the elites, authorities, conspiracies, the influence of planets, or we are subservient to gurus and ghosts (e.g. spiritual higher-self) we're giving our power away to those external agencies. We're not living our own lives, replete with the autonomy to consciously and intuitively choose a different, or better way. As Dr Kelly Turner found, common to those who regain wellness after after having been diagnosed with terminal illnesses, was that they took control of their health. And equally as important, in order to take control of their health they trusted their intuition, often in the face of significant disapproval and condemnation from medical authorities5.

So for the sake of one's health and wellbeing, it behoves each of us to own our lives, to be in control of our individual (and collective) destinies.

As Marmot et al have found, it's literally a matter of life and death (insofar as those with very low autonomy will generally be in poor health, and die early).

Category:
Creativity
Ego & Identity
Quantum Physics
See also (this site):
What is a belief-system?
The underlying cause of woke, cancel culture, and the need for mavericks and matrons.
The feminine urge to tribalise
Astrology, the Enneagram and Seth
Tribalism, as old as the stars
Radical Remissions From Cancer: 9 Key Factors
See also (net):
Determinants of health, wellbeing and resilience