The travesty of modern science

There are many who argue in various scientific circles and forums that mathematical theories based on unending, contiguous numerical continuity (infinite-series, calculus) are able to explain a series of perplexing theoretical dilemmas dating back nearly 2,500 years.

Those dilemmas, widely known as Zeno's Paradoxes raise issues relating to the apparent impossibility of everyday physical movement, which is assumed to occur continuously and smoothly.

The essential argument is that our space (and time) is able to be geometrically reduced down into "infinitely small" segments, thus enabling "perfectly" smooth and continuous movement.

Well, first of all (and this might not seem such a big deal), the assumed infinite-continuity of space-time means that it is always here, continually local and available to us in the here and now.

So, it becomes normal for scientists to look for those continually operating parts that cause problems in our lives — hence all that research into the human genome.

Matter and energy is just dead, inert. It's just stuff that we get to work, mould, shape and use.

So goes the theory. 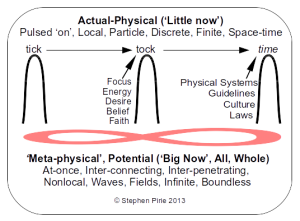 Unfortunately, and this is an extraordinarily big "unfortunate" for all us, by assuming that our space-time is composed of infinitely small segments — with no gaps in between them (see figure right) — we deny any possibility of a rich, inner (between) 'meta-physical' dimension to life that, if acknowledged and more fully explored, would revolutionize our sciences, our politics, our religions, our very sense of life.

Instead of looking within (in the gaps, intuitively, between our serial 'thoughts') for solutions to our problems, we instead look outwards for some God, or Science to save us.

And therein lies the problem ... for while ever we look outwards, we'll continue the competitive, manipulative sciences and religions that see us competing against each other and against nature (of which we are an integral part). Parts fighting parts. Not good for the well-being of one's whole body, society, ecosystem, planet..

As is more fully explained in "Moving beyond a 2,450 year old era", the theory and experimental evidence of quantum physics is now revealing that "movement is not fundamentally continuous"1. Particles of matter and energy — the very stuff that comprises our brains and bodies — move from location to location, without travelling the space in between.

As many, but not all are now realising, the old clockwork machine world-view that developed and became entrenched with the help of Newton's Laws of Motion, is no longer congruent with the world we know. Instead, we're being led to recognise that our brains and bodies, and the entire universe is continually unfolding and regenerating, many trillions of times each second.

A new era is emerging, one in which we see ourselves as part of a vibrant, self-organising, holodynamic reality. However, there remain many who hark back to theories that once worked reasonably well (Newtonian physics), but which no longer fit nearly 100 years of experimental results in quantum science. In many respects, this allegiance to old thinking is no different to superstitiously citing some religious text as being the complete and final truth, in the face of glaring evidence to the contrary.

As was exemplified in Galileo's time, the superstitious adherence to old belief-systems can do immeasurable harm to humanity's advancement and well-being.3

In reviewing the intransigence over accepting the idea that Zeno's Paradoxes cannot be solved using infinite series (see the above section and "Moving beyond a 2450-year-old era") I began to reflect on the deeper issue at play. I believe the core of the issue is one of immaturity and short-term expediency.

Specifically, when we believe in a mechanical, objective universe, we can believe it runs itself. We therefore think that we aren't in control, nor are we responsible for "it" doing what it does. When the world around us is viewed in such a manner, we are able to disconnect, or distance ourselves from intimate association with the resulting system. We are, in effect, able to lay blame elsewhere, claiming that we are victims in a random, senseless universe, or at the mercy of a vengeful God (science and religion, resp.). We consequently divide life into segments of good and bad, perpetrators and victims, higher and lower, guilty and innocent ...

A mature self-organising (holodynamic) systems world-view carries with it the responsibility for the reality we share, or in my everyday terms — we're all in this together, or, "no man (or woman) is an island". To quote Freeman Dysan, Emeritus Professor of Physics, Princeton.

Quantum mechanics makes matter even in the smallest pieces into an active agent, and I think that is something very fundamental. Every particle in the universe is an active agent making choices between random processes. ...consciousness is not just a passive epiphenomenon carried along by the chemical events in our brains, but is an active agent forcing the molecular complexes to make choices between one quantum state and another. In other words, mind is already inherent in every electron.

Zeno’s Paradoxes together with quantum experimental evidence telegraphs that the widely-accepted standard view of our physical universe is no longer deeply congruent with the facts.

A new holodynamic systems model — one that includes the physical evidence of a discontinuous space with that of a continuous (mathematical) meta-space -- is required.

Within this context (of a discontinuous space | continuous meta-space model) contemporary science provides only a limited snapshot of a far deeper multidimensional existence.  As covered in more detail at this and related sites, the world we experience, one amongst limitless others, is intimately connected with, and co-created through our choices.

To say or believe otherwise requires a small-ego selfish persona that seeks to remain disconnected in order to avoid responsibility for the resultant reality — which in turn is used to maintain, or gain financial benefit, and control of (to the detriment of) others and the natural environment.

That, I sense, is the reason many will continue to avoid recognising why we cannot solve Zeno’s Paradoxes using infinite series. And that is a travesty of modern science.

[From Claude Bernard's An Introduction to the Study of Experimental Medicine]

If a doctor imagined that his reasoning had the value of a mathematician's, he would be utterly in error and would be led into the most unsound conclusions. This is unluckily what has happened and still happens to the men whom I shall call systematizers. These men start, in fact, from an idea which is based more or less on observation, and which they regard as an absolute truth. Then they reason logically and without experimenting, and from deduction to deduction they succeed in building a system which is logical, but which has no sort of scientific reality.

Superficial persons often let themselves be dazzled by this appearance of logic; and discussions worthy of ancient scholasticism are thus sometimes renewed in our day. The excessive faith in reasoning, which leads physiologists to a false simplification of things, comes, on the one hand, from ignorance of the science of which they speak, and, on the other hand, from lack of a feeling for the complexity of natural phenomena. That is why we sometimes see pure mathematicians, with very great minds too, fall into mistakes of this kind; they simplify too much and reason about phenomena as they construct them in their minds, but not as they exist in nature.*

Notes. The Claude Bernard quote (above) was initially sourced from Ira Brodsky's website, "The Father of Physiology on Scientific Superstition". With appreciation and acknowledgement.