The jig is up

(US, idiomatic, dated) An expression used to mean "We have been caught out and have no defense", or if spoken to a person who's just been found out as the perpetrator of an offense, it means "You've been discovered."

For around 400 years science has -- with often great success -- played a jig on all of us.

That jig is now up. It's an extraordinarily easy jig to see - we need only use a little common sense to see it.

But the ramifications and consequences of seeing it are, and will be extraordinary.

When we accept the jig is up, we'll start to move into a new, highly effective, sustainable world-dynamic that will usher in profound new technologies (that cooperate with nature) and rich modes of interactions, creativity, relationships, communities and statehoods that are almost beyond imagination.

What is this jig?

For around 400 years since the discovery of calculus and Newtonian mechanics, there's been a convenient sleight-of-hand that no one has (apparently) questioned.

Basically, science holds that all physical movement from one location to another involves the physical object (be it atom, ant or avalanche) moving through an infinite number of 'infinitesimally small' intervening little steps.

The mathematics of calculus shows how this infinite-step process can occur in finite, everyday time. Hence the everyday experience of walking, eating and so on.

There's only one problem.

Science also has it that for each physical effect (e.g. movement of one's finger) there must be some identifiable physical cause. That's what science is based on ... finding the physical causes for physical events. It is the bedrock of nearly all scientific theories -- that we live in a deterministic universe, whereby for every physical effect, there is (in theory) some physical cause or causes.

But in the minutia of physical movement, scientists use the sleight-of-hand (calculus) to ignore an extraordinarily simple fact. There is obviously no possible physical electrical/chemical process that can entirely account for, initiate, control and stop an infinite series of physical incremental steps in movement.

Read that last sentence again. There is no physical cause that can entirely account for, or control our everyday experience of movement. None.

Let that sentence sink for a while ... "There is no physical cause that can entirely account for, or control our everyday experience of movement." That statement stands in direct contrast to the standard scientific belief that physical effects (e.g. physical movement) are entirely and only the result of some or many physical causes. That contrast is of course the root cause of the obvious "cognitive dissonance" among said scientists, philosophers, academics, et al.

How is any of that relevant to my well-being, health etc?

If physical movement is not able to be entirely explained in terms of physical causes, what then is going on?

Think of physical movement as being like a motion-picture film. Motion-picture films give the illusion of movement by quickly sliding past our eyes a series of frames. So far so good. That's not a difficult metaphor to understand.

However the scientists believed the motion-picture film-experience of real life comprised 'infinite' little frames.  But that's just silly. We can't expect to experience an infinite-frame life-movie. Besides the frames would be infinitely thin (we couldn't feel them in any case). 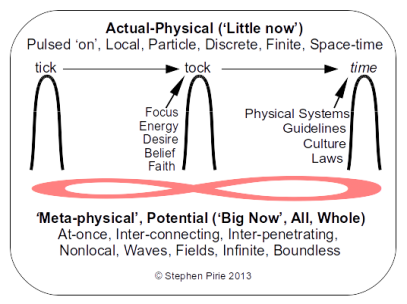 In other words, using the film metaphor, physical movement involves finite intervening little "steps" when we, for example, lift our fingers or bat an eyelid.

That's much more like it. That we can get our heads around.

In effect physical reality is rapidly blinking on and off, like Christmas tree lights. And it's doing it so rapidly that no one has observed it, or measured it.

Reflecting on this idea further, we're led to ask a profound question: "What's in between the blinks?"

Answer: no-thing. Nothing physical, that is. It's meta-physical, in literal, clear, unambiguous terms. See Fig. 4 (right)

So what's this no-thingness made of?

Well, that should be obvious, like it has been for many leading physicists (including Nobel Laureates).

It is difficult for the matter-of-fact physicist to accept the view that the substratum of everything is of mental character.

The universe is entirely mental.

Prof. Amit Goswami (Emeritus Professor of Physics at the University of Oregon's Institute of Theoretical Science)

Quantum mechanics makes matter even in the smallest pieces into an active agent, and I think that is something very fundamental. Every particle in the universe is an active agent making choices between random processes2
...consciousness is not just a passive epiphenomenon carried along by the chemical events in our brains, but is an active agent forcing the molecular complexes to make choices between one quantum state and another. In other words, mind is already inherent in every electron.3

"Inconceivable as it seems to ordinary reason, you ? and all other conscious beings as such ? are all in all. Hence this life of yours which you are living is not merely a piece of the entire universe, but is, in a certain sense, the whole."

"There is obviously only one alternative, namely the unification of minds or consciousness. Their multiplicity is only apparent, in truth there is only one mind."

"... the Leggett inequality that was recently measured ... rules out any possible interpretation other than consciousness creates reality when the measurement is made."

We're living in, and participating in a vastly complex self-organising system, one that evolves with intent.

No accidents; no superstitious chance events. All with intent.

So again what's that got to do with illness? You mean besides the fact that decades of research now reveals the number one cause for disease, by a long-shot, is "psycho-social". Meaning, illness, mostly, starts in the head and heart. With our beliefs. Furthermore, the majority of factors involved in recovery from terminal illnesses, are belief-system based.

For the sake of a healthy future, for one and all, it behoves us to consider our intent, our sciences, and our cooperation with nature.

After all, there is as a result of my work and that of others (see above), NO excuse for peddling tired old mechanical-universe superstitions. The Jig is well and truly up!