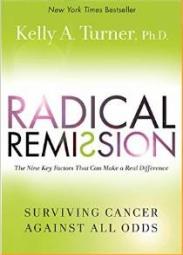 Dr Kelly Turner has extensively researched the factors involved in radical remissions of cancer (typically called "spontaneous remissions" or "spontaneous regressions" in the medical literature) and found there are 9 factors that are common to all such cases. They are

As Dr Turner explains "It is important to note that these are not listed in any kind of ranking order. There is no clear “winner” among these factors. Rather, all nine were mentioned just as frequently in my interviews.”

Some additional commentary on the above factors:

Years ago when seriously ill I intuitively felt the need for a raw-food, highly alkaline-forming diet (mostly fresh fruit, vegetables, and fruit/vegetable juices with mega-doses of ascorbic acid). As I gradually recovered, I naturally shifted towards a wholefood diet, with inclusion of meat and seafood, wholemeal breads, and so forth. But the initial raw-food diet (highly alkaline) was for me not only beneficial, but vitally necessary to regaining health.

"Taking control of your life"

In my experience this is (if one were to rank in order of importance) the most important factor. Simply because if we accept that we can take control and as a result not feel we're victims, then we will realign our internal radar (intuition) and look for solutions. Hugely important factor. See next factor, "Following your intuition".

Taking control doesn't mean taking control of others – affirming boundaries is vitally important. Many relationships we have can actively fuel our illness, insofar as they're stressful and detrimental to our wellbeing.

Around 95% of our behaviour is driven by habits so there's two challenges involved when taking control and changing our lives.

The first is that change can be scary – but when faced with serious illness, that fear becomes secondary to regaining wellness. As many cancer survivors report, getting cancer was the best thing that ever happened to them because it provided an unavoidable insistence to change.

The other challenge is dealing with resistance. Even though people may appear well-meaning, if your new health regimen threatens their comfortable, habitual or profitable world it's quite common for arguments to ensue. This skepticism of your new health regimen  will likely also come from "health-care" professionals such as doctors and those employed in the pharmaceutical and related industries. As it is wisely advised, when receiving countering arguments "follow the money" to see what's really going on. See Resistance and denials, below.

Following your intuition is equally important with "taking control of your life" because taking control involves the ability to follow hunches, gut-feelings and other reminders to take action. This factor is probably the most difficult to do. It requires trusting and stepping into the unknown, the untried, the new – with the very real risk of getting it wrong, causing harm to yourself, and all the while appearing to others (those not able to trust their intuition) foolish, wrong, stupid, or dangerous.

We most certainly do get those nudges!

Nothing is unannounced.
If you are paying attention, stuff comes down the pike.
First a little wave, then a medium wave, then the tsunami.
[Terence McKenna]

The mechanism which fuels our intuition is far and away beyond present science's understanding because those who become adept at trusting their intuition, are also precognitive and able to literally feel forward in time1. As I explain in my work, nonlocal (at-once) connections permeate throughout space-time underlying ALL the events of everyday life and can be practically relied upon for benefit. The challenge is in building one's intuitive muscles, which atrophy if we don't work those nudges and gut-feelings. It's a highly active component, requiring action, trust, faith etc.

Some links that further explore intuition, and the exceptional benefits thereof:

see above, radically changing your diet

In my experience this can be counter-productive if it involves reliving old hurts – as Augustine Burroughs explains, having himself been through years of therapy, "It's futile to try to understand the damage we have suffered," so it behooves us to focus on what we want. If the future, in which we're healthy, at ease, enjoying a fulfilling life needs a release or two, go for it.

What I have found the most beneficial is learning the art and discipline of 'letting go'. To let go and to focus on ease and wellbeing involves affirming boundaries while ignoring or avoiding negative people. It involves directing one's energy to being both masculine (strong firm boundaries, assertive, not being passive) and feminine (accepting, vulnerable, open, intuitive and flexible).

That said, I've found that it's easy to slip back into old patterns of remaining quiet, when we know we should speak our mind. It's easy to 'go along, to get along' with others, and not rock-the-boat. So this process of learning to take charge of our lives can be a two-steps-forward, one-step backwards process, but improvement can be immediately felt, nonetheless.

Positive emotions are typically a by-product of taking control of your life, and not feeling you're a victim, powerless, trapped etc. Hugely freeing. Enlightening. Hence the positive emotions.

Positive emotions can be 'scheduled' so to speak. One technique: upon waking, get up and go immediately to a mirror and force a smile, even though still groggy and half-asleep. Keep forcing it until you feel a genuine smile. Then notice how you day progresses, how things are naturally lighter, easier.

As Jeremy Rifkin delightfully draws and explains in his Empathic Civilization video, we're soft-wired to belong and to feel empathy. Social support taps deeply into our need to belong .. to a group, tribe, community. It also lessens stress, in the knowledge that it's not a so-called 'dog-eat-dog' world. As I reveal in my work, life if fundamentally cooperative, and that cooperation involves all of nature and physicality.

While some gain benefit from putting their trust in God, spirituality is a profound sense of being at-one with the community and the world, and (more importantly) at-one (in coherence) with our future in which we are well. Spirituality is not hierarchical – we don't need anyone's permission to be well.

"Having strong reasons for living"

One of the components of creating one's wellness is having a strong desire to be well. That might seem like a self-evident factor, however, quite often people who are seriously ill have let the stresses of life dampen their enthusiasm for life (btw, enthusiasm has the root en "in" + theos "god").

I posted ideas and material related to these 9 factors on a blog site relating to dietary matters, only to be the recipient of vitriol and name-calling. I was variously called a jerk, a fraud, a charlatan, a snake oil salesman, among many other things. Why?2

Because I championed the ideas and factors included in Dr Turner's list that clearly reveals diet is not the main factor in recovery. It's an important factor, but so are the others. That's the point of her book – ALL nine factors are important.

Dr Turner's claim that thousands of cases of spontaneous remissions have been published in medical journals resulted in repeated requests that I provide at least 20 links to such cases. It didn't matter that I reminded them I was merely the messenger, and that I was simply sharing Dr Turner's findings. Not good enough, they said.

While I'm not concerned in the least about the validity of her research and findings3, I gained the following links without any effort at all. So for those still undecided about the power of psycho-social factors in helping one recover from serious illness, these documented cases can remind you that remissions are possible, despite conventional medical opinion telling you there's no hope, or that there's little or no chance of a full recovery.2

What is interesting is that Dr Turner did the opposite to those who seek to ignore exceptional, or anomalous cases. As she explains in her book she decided "not to ignore these anomalous cases but rather do as Alexander Fleming14 did: take a closer look."