In the midst of the 'swine-flu' scare a while back it struck me ... how science, religion and various new-age philosophies are very similar.

The swine-flu scare has gained considerable media coverage, despite 30+ years of research confirming that physical things (bugs, bad genes, obesity, bad diet) account for a minority of the cause of disease, disability and premature death. We now know it is poor 'psycho-social eco-systems' that are the majority cause of early death and illness. But still the panic, or at least the media hype.

It's clear ... they each (in a strikingly similar manner) place the 'cause' of life 'out there' -- with religion it's God, with science it's 'chance' and new-age it's the planets, or some set of numbers or some reclusive soul that never seems to show up when it counts.

Science, religion and new-age philosophies are quite similar, inasmuch as they equally place the cause for our lives and experiences outside of our everyday thoughts, beliefs and expectations.

They all find some 'thing out there' that has power and control over us, disconnected from our conscious beliefs and desires. As we've seen with the flu scare, with science it's some bug or mutant gene floating around in the cosmos of chance. With religion it's some guy with a white beard floating around in the heavens. If we misbehave he'll punish us, big time. So says some 2,000 year old book.

With new-age, it's planets and stars floating around in the heavens, or a 'higher-self' that somehow we never get to meet. Or it's some number that has us marked. Wrong number, wrong birth date, too bad. All of it outside our direct conscious control and awareness.

We are, supposedly, powerless in the face of chance, a wrathful god, a bad star sign, an absent higher-self (not to mention alien abductions, conspiracies, evil and greed). All are beliefs about the deeper nature and process of life that are reliant on some form of disconnect. And yet since time immemorial we've been told, the fault dear Brutus is not in the stars but in our hearts. With out thoughts, we make our world. What things soever we desire ...

This all got me thinking about the author who (as I understand) originally coined the phrase "you create your reality" - Jane Roberts. Her Seth series of books are quite simply the most profound materials I've come across, by far. But what of her? She died after a long and debilitating illness, at a relatively early age (54). If she was so smart why then the early death, after a lingering illness?

Over the years I've thought about her plight, and the work she did. It seems to me that while one might bring forth a wonderful message that benefits many, it's another thing entirely to apply that message. We can all read or learn about 'the truth' but LIVING it is another matter altogether - just as reading a dinner menu can be quite different to eating the meal.

Her message that we 'create our reality' was closely aligned with the 'Many Worlds Interpretation' (MWI) of quantum physics. MWI has become the leading interpretation of science's "most successful physical theory."1 The Many Worlds Theory says we live in one of many parallel universes. She maintained that we get to move in and out of these alternative systems by the choices, desires and actions we take. Many physicists would take exception to that interpretation, believing (still) that something 'out there' (e.g. quantum gravity) or some physical thing, causes us to be in one universe, as opposed to any other.

Again, science, like religion seeks to disconnect our choices, beliefs and desires from the world we experience. There's an exquisite irony here: Galileo, it is reported, spent the last of his years under house-arrest for having championed the heliocentric view (that the Earth circles the Sun). The religious doctrines and behaviours of his time - the belief that the Sun and the entire universe circled around Man; that mankind was made in His image; and the punishment of Galileo - is now seen as a great travesty that held back scientific inquiry and progress. We've now 'progressed' to believing we're a lucky coincidence of molecules, subject not to the whims of a vengeful God, but to the vagaries of chance.

The irony is that the religious belief in our prime place in creation is now being reaffirmed by science's most successful theory - we are indeed at the centre of our universes, and we each have a central, pivotal role in the formed universe.2 According to Jane Roberts, the 'multiverse' is newly forming, continually cycling into actuality, and 'which world, which us' we experience depends on the expectations, beliefs, fears and desires we resolutely hold.

All of this fits with my sense of things, that life is the art, skill and science of putting choices, beliefs and faith into action thereby forming 'concrete reality.' To create a new product, book, building or baby is the magic of life. It's about building desire and potentials to such a high spiritual voltage that eventually there's a spark that leaps the gap between 'God' (source, all possibilities) into actuality and life. 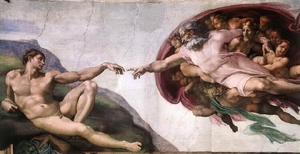 That's why entrepreneurs, writers, mothers, artists and creative scientists fascinate, enliven and lift all of us. They nurture something deep within all, forming, guiding and inviting the essence of life into our shared experience.